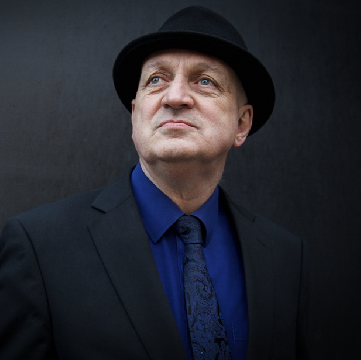 Since then, Paul has experienced a countless number of astonishing performances there from the likes of Stephane Grappelli, Dizzy Gillespie, Bill Evans, Roland Kirk, Freddie Hubbard, Machito, Woody Shaw, Nina Simone, Stan Getz, Art Blakey, Buddy Rich, Horace Silver, Oscar Peterson, Anita O'Day and of course on many occasions the guv'nor himself Ronnie Scott - his jokes as well as his storming quintet. Over the past 10 years, Paul has made focussed efforts to present European jazz in London particularly collaborations with Norwegian, Czech, Latvian and Dutch-based musicians and is keen to further links with the vibrant global scene as well as the currently burgeoning UK scene. Paul has sat on the judging panel of the international Riga Jazz Stage contest for 5 consecutive years and visits overseas festivals regularly.
Before joining the Ronnie's music bookings team in 2009, Paul worked in architecture and illustration but the pull of the music was so powerful that as a jazz fan and semi-pro singer he became more involved with live jazz promotion, particularly his longstanding residency at the Spice of Life, Soho (20 years). He also possesses extensive experience in specialist record retail (9 years at Ray's Jazz), is an avid collector and unwavering champion of the music. In 2008 he received the All-Party Parliamentary Award for Services to Jazz.
No attachments
No links
No multimedia
No forms
go back