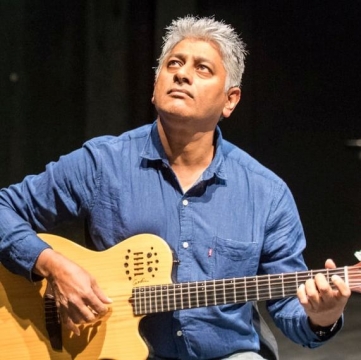 Director of the Bangalore School of Music, heading the Jazz & Contemporary music Dept., Music Relations, concerts, events, programming. He was also involved in programming, producing a Jazz programme on air on Radio Indigo [...]

[...] as well as a world music show in syndication with Putumayo World Music.
Self taught guitar player, composer and founder of MoonArra, based in Bengaluru, India, Jagadeesh is an experienced guitarist performing with pop, rock, jazz and fusion ensembles for three decades. From a young age, Jagadeesh was exposed to Indian Classical sounds as well as Western Classical music. Playing both nylon guitar and electric steel string guitar,Jagadeesh  has been collaborating with Dr. Prakash Sontakke & Karthik Mani, Pianist Norbert Kael & Percussionist Tamas Siska and Hoppal Mihaly from Hungary, Aion Quartet Switzerland,  Saxophone players Peter Natterer from Austria, Phil Scarff USA and and Biggi Vinkeloe Sweden, Flautist Leszek Wisniowski from Poland, Moroccan artist Gnawa Mal-em-Abdellah, Israeli Jazz Band Katamon Cherry, Malaysia based drummer Lewis Pragasam and Asiabeat, Indonesian drummer Gilang Ramadhan, santoor maestro Pt. Tarun Bhattacharya and his ensemble, ghatam vidwan virtuoso Smt. Sukanya Ramagopal, Australia based guitarist Tommy Smith, Khanjira Vidwan Amrit, flautists Pt. Milind Date and Vidwan Ravichandra Kollur, percussionist Muthu Kumar, jazz guitarist Gerard Machado, Carlos Gonsalves amongst others. Jagadeesh also performed with sax payer Ian Ballamy and drummer  Thomas Stronen as part of Prakash Sontakke's Global Music Festival. . His interest in flamenco music led him to Spain where he spent a month studying under Juan Maria Paul in Sevilla.  Jagadeesh also developed an interest in playing the Oud after a trip to Cairo, Egypt. As Head of Events at Radio Indigo (till 2008) Jagadeesh was instrumental in conceptualising a number of international quality concert events,  reviving and putting together what is arguably Bangalore's finest and one of India's best Jazz Festivals - The Indigo & Blues Festival in 2007 - and in 2009 a 3 Day Jazz Festival at the UB City for the Bengaluru Habba.  Jagadeesh continues to network with musicians both locally and internationally as part of his events interest.
As founder of MoonArra along with his wife and Co-founder Madhuri Jagadeesh - MoonArra has had 9 international overseas concert performance tours since 2009.
Particularly over the last 2 years from 2016-2017, MoonArra has performed in Switzerland, Austria, Hungary, Poland and  Ireland, as part of a concert tour, workshop and a studio collaboration with Austrian based musician and saxophone player Peter Natterer  which resulted in the album ‘Lily Walking’, which was released online in 2017 on itunes, spotify and other online sites.
A special feature was 2015’s festival performance at the 16th edition of Tanjazz Festival, “Jazz of 5 Continents” in Tangiers, Morocco between Sep 9 to Sep 13 to rave reviews by the media and the audience which comprised of French, Spanish, Italian and Moroccan people. The festival was also part of UNESCO’s 70th Anniversary Celebrations and its message of “Jazz for Peace and Goodwill and inter-cultural dialogue and presence of Jazz in education, science and culture.
In all, Moonarra performed two concerts and a workshop as part of the Tanjazz festival.  A special highlight of the festival, was the finale at the Italian Palazzo, collaboration by MoonArra with Dar Gnawa Maalem Abdellah and his team of musicians and this was billed as “India Meets Africa”.
Jagadeesh is the Director of the Bangalore School of Music, heading the Jazz & Contemporary music Dept., Music Relations, concerts, events, programming, etc.
As part of UNESCO International Jazz Day, last year 2020 where everything was held online due to the global crisis, Jagadeesh and co-founder Madhuri of MoonArra collaborated with 15 musicians internationally for  an online ‘virtual’ video performance of one of Moonarra’s compositions Trieste for JazzDay.
In 2020, Jagadeesh was invited to be part of an International jury for the successful Seven Virtual Global Jazz Contest.   Jagadeesh continues to network with musicians and organisations both locally and internationally as part of his events interest.
No attachments
No links
No multimedia
No forms
go back