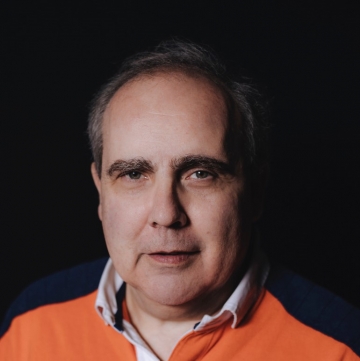 Ermanno Basso has been active in the world of international music for over 35 years where he has held various roles, covering all the roles of the music industry. Since 1997 he has been producer and label manager of the Kepach Music group based in Rome and New York, with a catalog of over 1000 titles for the labels: Cam Jazz, Black Saint, Soul Note, Dischi Della Quercia, Cam Jazz Presents.

He has produced over 300 albums collaborating with the most important international musicians. Some of his productions have obtained international awards including: 6 Grammy nominations, 2 Echo Prize (German Grammy), 2 Schallplattenkritik (German Music Industry), Teosto Palkinto and many others.
In 2018 he founded SimulArte together with two other partners Federico Mansutti and Stefano Amerio, a company that deals with the cultural development of arts, in particular the musical scene.
In 2021, following the evolution of the digital market, and the need for artists in the DIY (Do It Yourself) process, he collaborated in the creation of the TAG - The Artist Garage platform, a tool that aims to accompany artists in all stages of production, launch and promotion of their creations.
Since February 2020 he has been vice president of ADEIDJ, the association that brings together the major independent Jazz labels in Italy.
Since January 2022 he has been president of MIA - Musica Indipendente Associata is the Italian trade association that represents and promotes the interests of phonographic producers, record labels and music distributors.
Over the years he has been the curator and artistic director of various festivals with the production of over 500 concerts, international artistic residencies, and conferences; he collaborates and has collaborated with various national and international institutes in the teaching of the Music Business field.
No attachments
No links
No multimedia
No forms
go back