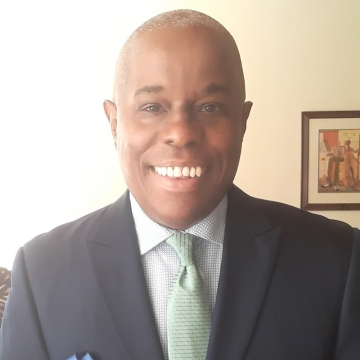 Eddie Becton is an author with over twenty years of jazz experience as a writer, producer, broadcaster, and professor.  He taught History of Jazz in America at Loyola Marymount University in Los Angeles, as well as other courses in the African American

Studies Department, Communications Department, and American Cultures program.
Eddie elevated the university’s jazz presence in the community by promoting, producing, and hosting jazz concerts, the most ambitious being a day-long concert that featured ten jazz bands.
While in Los Angeles, he produced and hosted a weekly radio program, The Jazz Journey, on KXLU-88.9 FM-Los Angeles that included interviews with artistic icons such as Ahmad Jamal, Charlie Haden, Les McCann, Gary Burton, Michael White, and John Klemmer, among many others.  His weekly program was one of the most popular throughout California and attracted a national and international audience, the latter with a vast listenership in New Zealand, Bermuda, Great Britain, Toronto, and Nova Scotia.
Eddie also served as co-founder for the monthly periodical, All About Jazz-Los Angeles, where he wrote about jazz and interviewed artists such as Abbie Lincoln, McCoy Tyner, Randy Weston, Horace Silver, Chick Corea, Terence Blanchard, and many others.
He currently lives in St. Louis and spends his time promoting artists, reading, traveling, playing chess, and, of course, spending countless hours listening to classic jazz.
No attachments
No links
No multimedia
No forms
go back