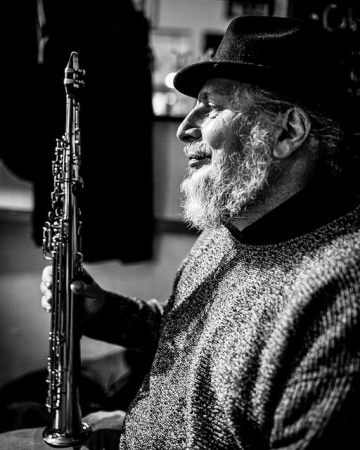 Alain Derbez, born in Mexico in 1956, is a poet, narrator, essayist, song writer and musician who is the founder, among other groups, of Sonora Onosón and Los Gallos Justicieros in Mexico City and El Codigo Postal in the city of Xalapa.

The saxophonist and accordionist Derbez, who studied History at the UNAM and hosts and produces radio and television series (Radio Educación, Radio Unam, TV Unam, Radio UV and NoFM), has published several fiction books and poetry (among others Los usos de la radio, Cuentos de la Región del Polvo y de la Región del Moho, Antes muerto, La vida y no sus lamentos, El jazz según don Juan, etc.) and, focused on music and, in particular, on blues, rock and jazz, several books of essays and anthologies.Titles in this field are Por saber se calla (essays on history, literature and music) , Pluma en mano (between blues and jazz), El jazz in Mexico, data for this story, The sixties turn thirty (literature and rock in Mexico) and the anthology on blues and jazz in Hispanic- American literature Everything can be heard in silence. Among his translations is the book also annotated by him by Ajay Heble, Caer en la que no era (jazz, dissonance and critical practice) published in 2012.
Derbez was a teacher of Introduction to Criticism and History of Jazz in Mexico at the Superior School of Music, has taught courses and directed workshops and given conferences and recitals in almost all the states of the country and in the United States, Canada, Cuba, Brazil, Bulgaria, Guatemala and Spain.
In 2008 he was the only Hispanic American speaker at the International Meeting of Jazz Writers organized in New York by Columbia University.
As an editor he has published the books "Nationalism and Culture" and "Artists and Rebels" by Rudolf Rocker and was founding director of the cultural magazine "El Acordeón" of the National Pedagogical University.
Derbez has records with music. lyrics and poems of his authorship: La Cocina, Música para bailar, Las cosas por algo son, (Privado-Público, Grasa Bolero and Por causas de fuerza mayor con El Código Postal, Ya son horas, Ya con eso, two CDs with Sonora Onosón and his songs have been performed and recorded by, among others, Eugenia León, Tania Libertad, Gerardo Bátiz, Real de 14, La Fontegara, Alex Lora, Armando Rosas, Betsy Pecanins, Iraida Noriega and Oscar Chávez.
He has been a member of the National System of Creators in Mexico,
Derbez was the winner in 2021 of the XXIX Juana Santacruz literary contest of the Spanish Ateneo de México (short story), also winner of the Jorge Ibargüengoitia Novel Prize Jorge Ibargüengoitia (2008), recipient of the Salvador Novo, Inba-Fonapás and Cervantes Studies scholarships in narrative, poetry and essay.
No attachments
No links
No multimedia
No forms
go back