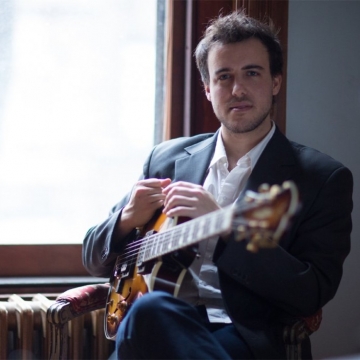 Jazz guitarist, Hekselman did his studies first in Israel and then in New York. During his career, he played in the major jazz clubs in NY, such as the Village Vanguard, the Blue Note and the Jazz Standard while constantly touring world wide. Hekselman has released 9 critically-acclaimed records as a band leader and soon the 10th will be out!

He was awarded as the first place in the 2017 edition of our contest with the song "Ghex clap clap". He was described as "a brilliant guitar player accompanied by great musicians swaying with him between jazz and latin rhythms in an excellent original composition. "

His entry in the contest was described by our judges as "bold yet understated, modern yet traditional. Hekselman’s tone is clear and warm and the accuracy of his playing is remarkable. Rhythmically synched, the trio’s playing is mature and controlled yet spontaneous and improvised. The communication between the musicians is significant". They praised the "unique compositional voice and a great sense of ensemble connectedness and purpose. Both fire and control! "

No attachments
No links
Multimedia
No forms
go back