Romanian writer, jazz expert, diplomat, jazz aesthetics professor, polyglot and performer. Virgil was co-founder and the first director of the Romanian Cultural Institute in Lisbon, and served as minister-counselor at the Romanian embassy in Portugal (2006-2012). Currently, he is assistant professor on Jazz Aesthetics at the Music Academy in Cluj. 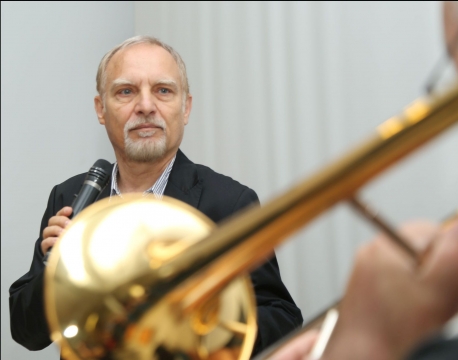 At the same time, he is director of the Casa do Brasil / Brazilian Cultural Centre, as well as the Biblioteca de Estudios Latinoamericanos, both institutions functioning under the aegis of Cluj's principal University.

Virgil Mihaiu graduated from the Faculty of Letters at Cluj-Napoca's principal University/Romania in 1974, after studying English and German, as well as Spanish and Portuguese.

Between 1971 and 1983, he was on the editorial staff of Echinox, a prominent cultural magazine published in Cluj.

In 1981, he became a member of the Writers' Union of Romania.

Between 1983 and 1994, he was part of the editorial staff of Jazz Forum, the International Jazz Federation's magazine published in Warsaw.

He joined the editorial staff of Steaua, the cultural monthly of the Writers’ Union, in 1990.

Mihaiu became an assistant professor at Cluj-Napoca's G. Dima Music Academy in 1992. Five years later, he founded the Jazz Aesthetics Course within the jazz department of that institution.

Since the 1990s, Mihaiu is a member of the international Jazz Journalists' Association (JJA) based in the U.S., as well as of the DownBeat Jazz Critics Poll; he is also an honorary member of the New York-based F. Scott Fitzgerald Society,

Since 1996, he is a member of the Romanian branch of P.E.N. Club, and an honoray member of the Prague-based Czech-Romanian Cultural Association.

In 2001, he became the first East-European ever to be included in the international editing board of DownBeat (the world's foremost jazz publication, edited in Chicago since 1934).

In 2006, V.M. founded and became the first director of the Romanian Cultural Institute in Lisbon, continuing in the post until 2012. He also served as minister-counselor (cultural attaché) at the Romanian embassy in Portugal.

Between 2004-2007, he has served as a member of the European Jazz Prize Jury (the Hans Koller Prize), patronised by the government of Austria.

Between 2000 and 2005 V.M. participated at the F. Scott Fitzgerald World Conferences (including the one held at the Hofstra University N.Y. in 2004, where he moderated the interdisciplinary section's sessions).

He has also given a series of lectures, recitals and undertook documentation tours through universities and cultural institutions of the United States (New York, Philadelphia, Washington D.C., New Jersey, etc. − e.g., a lecture about the universal significance of contemporary jazz, delivered for the staff of the Smithsonian Institution's Jazz Department in Washington D.C. in 2004).