Member of the Jazz Journalists Association, journalist for All About Jazz, Jazz Times Digital and various newspapers in the Dominican Republic. He is the Founder and Director of Jazz en Dominicana. 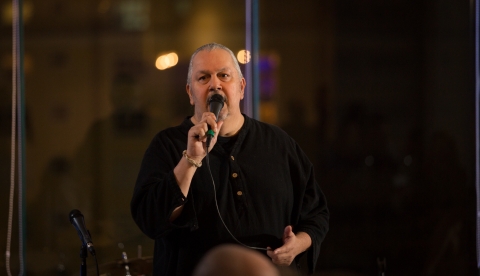 Fernando Rodriguez De Mondesert was born in the Dominican Republic , at an early age he moved to United States, living and being educated in Hempstead, New York. He later went to college at the University of Houston and exercised his hotel career with the Hilton Hotel chain, until 1982 when he returned to his home country. From 1983 to 2008 he dedicated himself to the freight transport and logistics sector; having been, amongst others: Operations Manager for Island Couriers / Fedex; Air Division Manager for Caribetrans and General Manager of DHL. In 2006 he creates Jazz in Dominicana, and since 2008 each day has been dedicated to informing, promoting, positioning and developing jazz in the Dominican Republic and Dominican jazz around the world.
Jazz en Dominicana has developed a platform that informs and promotes Dominican musicians in the genre of jazz. Its mission is to make known, position and promote Dominican Jazz. To be an important channel to support the culture of the Dominicans is its vision.
Jazz en Dominicana blog has informed readers in over 55 countries in more than 1,700 articles, reviews of concerts and festivals, interviews, biographies, photos and others about the musicians from this country. It is the only media 100% dedicated to this genre in the country. And via the venues that offer weekly live jazz, they have succeeded in presenting more than 1,200 events. Currently the venues are: Fiesta Sunset Jazz (since December 2009) and Jazz Nights at Acropolis (since 2017).
His curriculum is quite long; here ares some highlights:
• His articles have been published in the "Listin Diario", "Hoy" and "Diario Libre” newspapers. Also in the “Barco de Jazz" and "Musica Maestro" forums, among others. He also writes in english in the renown publications All About Jazz.
• A frequent invitee to several radio programs to do specialised Jazz programs. Also, Master Classes in clubs and others.
• Has taken Dominican Jazz groups to Indi¡y Jazz Fest, BarranquiJazz Festival, Panama Jazz Festival, Mompox Jazz Festival and Gwadloup Festival.
• Has produced the CD Release concerts for 13 albums; has been the co-producer for 6 ; and. written the liner notes for 10.
• Has been distinguished with many recognitions and awards from the likes of the Ministries of Culture and Tourism in his country; as well International Jazz Day and the Herbie Hancock Institute of Jazz for his role as and organizer whom, since 2012, has been instrumental in helping to realize International Jazz Day around the world.
• His venue, Fiesta Sunset Jazz, came in at no. 21 in the world in the 2019 All About Jazz Reader's Poll.
• In 2019 he was one of 7 winners in the Global Blog Awards, and one of the prizes was the publication of a book, which was done in February 2020. Jazz en Dominicana: The Interviews 2019 was published by Ukiyoto Publishing Co., and is available in Amazon.
• Has been a member of the 7 Virtual Jazz Club Contest Judges Panel since 2016
Fernando says: I love to listen to good Jazz with premium cigar; a good glass of red wine or a malt whiskey, or my favorite - Jack Daniel's Single Barrel. I love music, I live it, I can not think what life would be without her in it, especially Jazz ... I am a "Free Spirit" and I like to live life as best as possible, every day ... just as the day starts and its 24 hours give us so much to do, so much to be grateful and to live for .., and I do, to the max, respecting others ... with heart in hand ... I'm very spontaneous.
No attachments
No links
No multimedia
No forms
go back