Vocalist and pianist. She is a Lecturer in the Jazz Studies programme at the University of KwaZulu-Natal, School of Arts (Music). She is the Project Manager of the UKUSA Arts Programme and is a Board member of KUMISA (KwaZulu-Natal United Music Industry Association).
Debbie has enjoyed many musical collaborations as a performer who enjoys singing jazz standards and original compositions such as those she recorded with Darius Brubeck (Before It’s Too Late, title track), George Mari (Since I Met You) and Richard Walne (The Only One Around, title track). 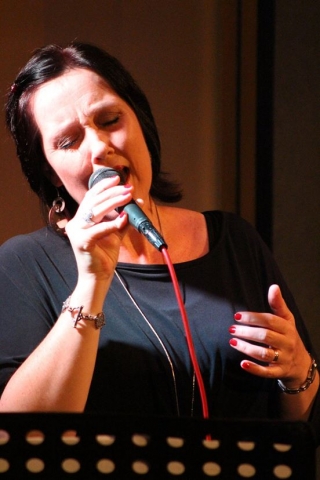 Debbie is a vocalist and pianist and has performed with the Stockholm Jazz Orchestra, the KwaZulu-Natal Philharmonic Orchestra and performs often with Durban-based musicians George Mari, Burton Naidoo, Melvin Peters,  Ildo Nandja and Philani Ngidi to name a few. She has vast teaching experience which includes Music Specialist teaching in primary schools, developing and managing community music projects and Higher Education.
In 2013, Debbie and George Mari established Marigold Music School as an opportunity to share their knowledge and skills as professional musicians and experienced educators with children and adults of all abilities in the greater Durban area. Debbie frequently adjudicates singing eisteddfods and music competitions hosted by local schools.
She has presented Vocal Jazz workshops for the South African Music Teachers’ Society, UNISA International Jazz School (2012) Festival In The Hills (2015) South African National Arts Festival – National Youth Jazz Festival (2015) and the UNISA National Vocal Competition (2017). Debbie has been a preliminary judge for SA Idols (2012, 2014), SA’s Got Talent (2014, 2016, 2017) and The Voice South Africa, Durban auditions (2016). She was the Vocal Coach for SABC 1’s Season 1 of X Factor South Africa (2014).
Debbie was the 2015/16 AFDA (Durban) Discipline Chair for Live Performance Majors (Music) and in 2016 she delivered the Keynote address at the KZN Music Imbizo.
She was a member of the adjudication panel for the 7 Virtual Jazz Club International Online Jazz competition in 2017.
No attachments
No links
No multimedia
No forms
go back