Musician, writer, broadcaster (Jazz London Radio, Pure Jazz Radio)
He was raised in Cardiff, and in 1974 co-founded the Welsh Jazz Festival with Geoff Palser. He was instrumental, four years later, in establishing the Welsh Jazz Society with David Greensmith. As a jazz trumpeter Chris joined the Icon Jazzmen when he was 18. 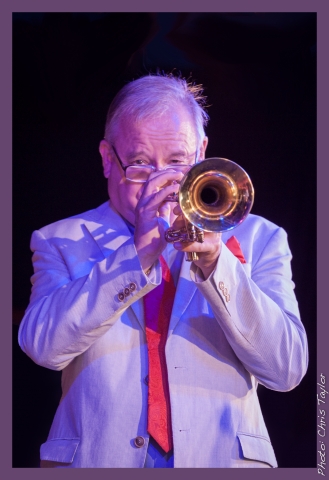 As a professional trumpeter, Chris toured the UK and Europe with Johnny Bastable’s Chosen Six, Monty Sunshine, Route 66; appearing at the Sacramento Jazz Festival in the States with the Pete Allen Band, and made tours of Germany with the Chris Haskins Band.
The Chris Hodgkins Band made a name for itself supporting the likes of Buddy Tate, Humphrey Lyttelton, Kathy Stobart, Bud Freeman, Dick Carey, Harry South, Ronnie Ross, Billy Butterfield, Joe Temperley, Howard McGhee, Peanuts Hucko, Benny Waters and Wild Bill Davison who said “It is a hell of a good band”. The band made a number of television and radio appearances.
Chris relocated to London to play professionally. In 1985 he was appointed Director of Jazz Services the national organisation funded by Arts Council England to provide services in information, touring, education, communications and publishing to the UK jazz community. In 2005, Jazz Services won the Best Website category in the first Parliamentary Jazz Awards; Chris was made a Fellow of The Chartered Institute of Marketing the same year. Jazz Services received the 2008 Parliamentary Jazz Awards for Jazz UK as best jazz magazine. In January 2011 Jazz Services was awarded National Portfolio Organisation status by Arts Council England for three years from 2012 to 2015. As Chair of the National Jazz Archive, Chris led the team that secured investment of £346,300 in the National Jazz Archive by the Heritage Lottery Fund in July 2011. In May 2012 Jazz Services received the 2012 Parliamentary Jazz Awards for Jazz UK as best jazz magazine.
After 29 years at the helm of Jazz Services Chris took the decision to step down as Director of Jazz Services in May 2014. Throughout his tenure at the head of the organisation, Chris had been instrumental in the development of Jazz Services as a resource for the music, championing its cause and offering his advice to anyone who required it. Among his many successes was the National Touring Support Scheme which he helped to establish with Debbie Dickenson. This has enabled the careers of hundreds of artists over the years. There was also the organisation’s Rural Touring Support Scheme (with the National Rural Touring Forum), the Jazz Promoters Award (with the PRS for Music Foundation), the Recording Support Schem that funded 32 CDs and the Online Music Business Resource, which offers free career advice to anyone who needs it.
Chris also helped to set up the annual Parliamentary Jazz Awards to recognise jazz talent and ensured the Arts Council’s continued support of Jazz Services. His influence and guidance have been crucial to the careers of many of the UK’s top jazz artists, and his enormous contribution to the wider scene has already been recognised by the receipt of a BBC Jazz Award (2002) and a British Jazz Award (2013) - both for Services to Jazz.
With his days of administration behind him, Chris now takes to the road, the radio and the recording studio to focus on playing the music he loves.
Chris was awarded the Services to Jazz Award at the Parliamentary Jazz Awards in March 2015.
Chris fronts three outfits: The Chris Hodgkins Quartet, featuring Alison Rayner on double bass and Max Brittain on guitar with the addition of Diane McLoughlin on soprano/alto sax, the Chris Hodgkins Band and he works with pianist Dave Price in a trio setting with Ashley John Long or Erika Lyons.
In 2005, the Chris Hodgkins Trio, with Max Brittain and Alison Rayner released“Present Continuous” and the second Trio album “Future Continuous” followed a year later.
Chris’ most ambitious project  was the album “Boswell’s London Journal”, a suite of 15 tunes co-composed by Chris Hodgkins and Eddie Harvey, Which received the Evening Standard CD of the week in 2009.
In September 2014 with Dave Price, Erika Lyons and Ashley John Long, Chris completed the album “Back In Your Own Back Yard”. Chris returned to Wales to rehearse and record the album.
In September 2014 Jazz London Radio announced that Chris Hodgkins will be joining the station with a new weekly show called “Jazz Then and Now” on Jazz London Radio
On the 15th February 2016 Chris started presenting a programme Jazz Is...... on Pure  Jazz Radio in New York.
In July 2017 Chris was appointed by the All Party Parliamentary Jazz Appreciation Group to act as their Secretariat. The Group recently held the Parliamentary Jazz Awards at PizzaEpress Live in Holborn, London.
In October 2017 Chris released the album; Lenore Raphael, Wayne Wilkinson and Chris Hodgkins at Pizza Express Live, Dean Street.In October Chris also released; Chris Hodgkins And His Band - Retrospection featuring the radio and TV broadcasts 1976-1978 and Remembering John Evans 1934 – 2015.
Chris has just published three new manuals and revised three manuals on the On line Music Business Resource. The three new publications are; Where do you want to be – a business planning manual for jazz music students and musicians, the Guide To Music Organisations – Including Copyright, Royalties and IRCSs; and  A Quick Guide to Contracts for Jazz Musicians. The three manuals that have been revised are; Guide To Marketing Your Band; Funding Tips; and the Guide To Getting Your Music On The Radio. All six manuals are available as free downloads from:  www.chrishodgkins.co.uk
No attachments
No links
No multimedia
No forms
go back